RANDOLPH, NJ — More than 800 people received free COVID-19 tests on the first day of Morris County’s reopened COVID-19 testing site. Officials believe the site, which opened Monday, will administer 800-900 tests daily for at least the coming week and beyond until the surge in COVID-19 cases weakens.

“The center is running smoothly with everyone being tested rather quickly upon arrival,” said Tayfun Selen, director of the Morris County Board of Commissioners.

Selen’s remarks came as he and other officials toured the facility, housed in the Student Center at the County College of Morris in Randolph. Phlebotomists with LabQ Diagnostics administered the tests, which involve LabQ PCR nasal swabs.

Patients were advised that the national demand for testing has inundated laboratories and delayed analysis. So results that would typically become available in 24 to 48 hours may take more than three days to obtain.

The center is open seven days per week from 7 a.m. to 6:45 p.m., except from 12:30-1 p.m. Testing is appointment-only, and they must be scheduled at Morris County’s COVID-19 information webpage. No one can walk into the facility without an appointment. 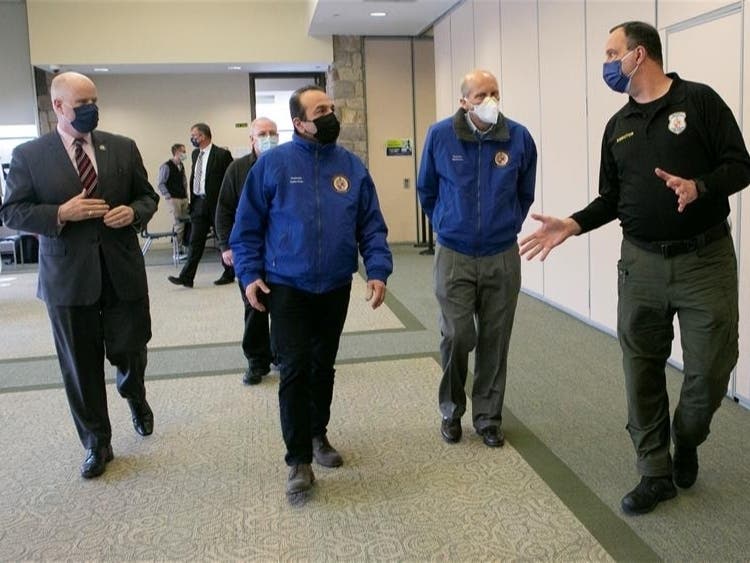 Morris County previously operated a testing center in the same location, but officials closed it in July as tests became more accessible and demand waned. The site’s reopening came as the state’s case totals continue to soar.

The New Jersey Department of Health announced 21,691 — less than Sunday’s reported total of 26,615 cases and Saturday’s count of 29,564 infections, but well above any of the state’s pre-omicron-variant case numbers.

Officials have seen a similar trend statewide. New Jersey has seen a higher percentage of infections among people who are fully vaccinated, as breakthrough infections represented 31,334 of New Jersey’s 101,000 cases from Dec. 20-26. But fully vaccinated individuals represented a far small portion of those hospitalized with COVID-19 (four of 2,640) and people who died from the virus (five of 146) in that span.

Only 43.5 percent of Morris County’s fully vaccinated population have received their booster dose, including only 47.5 percent of adults — the primary age group eligible for the booster — according to the Centers for Disease Control and Prevention. See info on booster eligibility from the CDC.

Eleven people in Morris County have died from COVID-19 in the past week, according to the CDC.

Build with Love by HiFive.NYC